Buy Chess at the lowest price 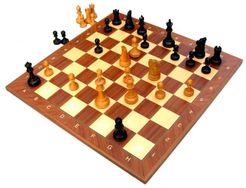 Chess is a strategic game in which two armies of equal number of soldiers do battle. You must strategically place your men in sectors of the playing field, the board, in order to destroy the man in charge so that the rest of the army cannot be instructed.

In this case, the leader is the king. The object is to make it impossible for the king to flee anywhere so that your army can destroy him. This is called checkmate .

Checkmate is discussed in detail later on. For those who are curious, follow the link above. Chess is one of the most complicated board games that I have ever played and I'm sure you'll find the same. It requires a great deal of knowledge. It is one of those "Easy to learn, impossible to master" type of games.

It goes way beyond learning how the pieces move and can become very confusing if not read carefully or is not described properly. This is why chess has more literature written on it than any other board game, for players of all skills.

Another, optional thing that you may want to buy as you begin to play chess more, if you continue that far, is a chess clock. A chess clock is really two clocks that are connected together. It has two push buttons on top which, when one is depressed, the other button is pushed up and causes that clock to begin ticking.

After it is pressed, the other button pops up and begins ticking, and so on. The clock was created so that those playing are not allowed to take forever to think. This limits a person's time and makes the game much shorter as well as more interesting because if your clock runs out, you lose the game!