In Pax Pamir, each player assumes the role of a nine teenth-century Afghan leader attempting to forge a new state after the collapse of the Durrani Empire.

Western histories often call this period "The Great Game" because of the role played by the Europeans who attempted to use Central Asia as a theater for their own rivalries.

In this game, those empires are viewed strictly from the perspective of the Afghans who sought to manipulate the interloping ferengi (foreigners) for their own purposes.

In terms of gameplay, Pax Pamir is a pretty straightforward tableau builder. Players will spend most of their turns purchasing cards from a central market and then playing those cards in front of them in a single row called a court.

Playing cards adds units to the game's map and grants access to additional actions that can be taken to disrupt other players and influence the course of the game.

That last point is worth emphasizing. Though everyone is building their own row of cards, the game offers many ways for players to interfere with each other, both directly and indirectly.

To survive, players will organize into coalitions. In the game, these coalitions are identified chiefly by their sponsors. Two of the coalitions (British and Russian) are supported by European powers. The third coalition (Afghan) is backed by nativist elements who want to end European involvement in the region.

Throughout the game, the different coalitions will be evaluated when a special event card, called a Dominance Check, is resolved. If a single coalition has a commanding lead during one of these checks, players loyal to that coalition will receive victory points based on their influence in that coalition.

However, if Afghanistan remains fragmented during one of these checks, players instead will receive victory points based on their personal power base.

Pax Pamir begins in a period of great political upheaval. Ayub Shah, the last of the Durrani emperors, has just been deposed. A region once unified is now on the verge of total collapse, and local authorities are taking the initiative.

To represent this political climate, place the favored suit marker on the space next to the political suit. …

The map consists of six regions. There is no limit to the number of pieces that can be placed on a specific region or border, and pieces belonging to different players and coalitions can occupy the same region or border. The map is bordered by a victory point track and spaces to mark the favored suit.

Each coalition has twelve blocks in its color. What a block represents depends on where it is placed. A block placed in a region is called an army. If placed on a border, the block is called a road (it helps to set roads on their side to make them stand out at a glance). …

This section introduces an automated opponent called Wakhan. Thematically, this opponent represents some radical ideology (theological or philosophical) that has taken hold across the region and that transcends traditional loyalties.

Wakhan can be faced by one or two human players. However, this is not a cooperative variant and only one player (or Wakhan) can win the game.

When setting up a game with Wakhan, make the following adjustments: 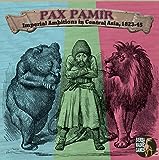 Through the Ages: A New Story of Civilization

Z-Man Games A Feast For Odin

Imhotep Builder of Egypt Board Game