Buy Through the Ages: A Story of Civilization at the lowest price 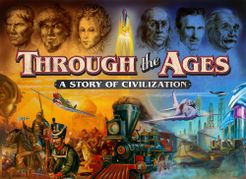 News, Videos, Reviews and Links about this board gameBuy Through the Ages: A Story of Civilization cheaper at your local shop

Through the Ages: A Story of Civilization is a civilization-building board game by Vlaada Chvatil that spans the history of human civilization. Guide your civilization up from antiquity, through the middle ages and into modern times, and defeat all rival civilizations who dare to stand against you!

Ever since Sid Meier's Civilization computer game was created in the early 1990's, the idea of civilization-building has captured the imaginations of millions of players. It is therefore only natural that players would want that same experience in board game form so that they can play face-to-face with their friends.

There have been many board games in this genre (including the original Civilization board game on which Sid Meier based his computer game), but none has managed to combine the epic feel of civilization-building with sleek mechanics as well as Through the Ages has.


Object of the Game

The objective in Through the Ages is to build a civilization that is greater than all others. The full game will take you from the Age of Antiquity through the Middle Ages, the Age of Exploration and finish up in the Modern Age. During this time, you have to make sure your civilization ends up being the most powerful with the most lasting legacy.

This is measured in the game using culture, which represents your civilization's overall mastery and glory. This is done by developing your military, religion, technology and government; and the civilization that manages these sectors most wisely will win the game.

There are two types of actions in Through the Ages: civil and military actions. Civil actions allow you to obtain and play civil cards such as leaders, wonders, technologies and governments, as well as grow your population and construct buildings. Military actions let you draw and play military cards such as wars, pacts, territories and events, as well as hire armies. These actions limit the amount of things you can do each turn, and can be increased by adopting advanced governments or researching technologies.

You start the game with the most basic knowledge such as farming, mining and religion. You need food to grow your population, resources to construct buildings and hire soldiers, science to research new technologies and happiness to keep your population from rebelling. These can all be improved as you research new technologies. For example, researching the iron technology will allow your mines to produce more resources, and the scientific method technology will improve your science research. You need all this in order to create a culture-generating engine that will win you the game.

Or you could recruit the fearsome Genghis Khan and create a huge cavalry army that will earn you culture by sheer domination. Or you could even complete wonders of the modern age such as the Internet and the First Space Flight to earn endgame culture. The options are nearly limitless!

Through the AgesHowever, if this were the only aspect of the game, it would end up becoming a game of multiplayer solitaire. There is plenty of interaction between players in Through the Ages. If you have a larger army than your opponents, you could initiate aggressions and wars against them. Doing this can allow you to steal their technology or culture, or even plunder their resources and raze their buildings! Anything to give yourself a leg up in this race.

You will also have to compete with other players when you colonize new territories, sending in your armies to claim new land. There are also less aggressive forms of interaction such as research and defensive pacts that you can make with other civilizations, helping each other as you advance through the ages. You can also "seed" events that will change the course of history (hopefully in your favor). If you have the lowest culture, why not include a barbarian uprising event which will destroy the buildings of the more cultured civilizations?

As you can tell, there is so much going on in Through the Ages that a review can hardly cover everything. There are a few quibbles though that prevent it from being the perfect civilization-building game. It would be nice to have a map which shows the reach and influence of your civilization and its borders with either friendly or hostile players. Unfortunately, there isn't one in this game. The major drawback though is the amount of time it takes.

A full game with 4 players can last over 4 hours, and that is if every player is experienced in the game. You need a pretty large time investment in order to play it. After all, building a civilization from antiquity right thru the modern age isn't something you can do in an hour!

The designer has accounted for the time factor though. You can play a basic game that ends with the Middle Ages, or an advanced game that takes you to the Age of Exploration. However, the full game is still best as you get to experience the entire span of human civilization.

Overall, Through the Ages is the ultimate board game for those who love the history of human civilization and want to see their efforts rewarded by steering their civilization to become the most powerful in the world.